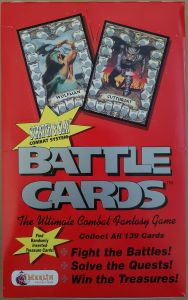 BattleCards was marketed as a trading card game and published in 1993 by Merlin Publishing. The game features a unique "Scratch and Slay" system created by Steve Jackson. The cards came in 10 card booster packs which included warrior cards, spell cards, advanced combat cards, quest cards, and treasure cards. The game was published in both the UK and the United States with a number of differences between the two releases. Since the game is not played with a deck, and there is no collectibility involved (once the cards are scratched off they're worthless), this game does not strictly qualify as a collectible card game. Darwin Bromley of Mayfair Games noted that when shuffled the scratch-offs would crack, and once scratched off "you had to either play the game or collect it." "You couldn't have your cake and eat it too."