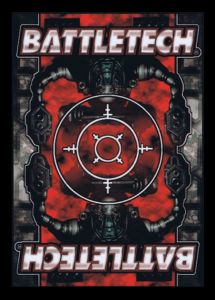 The BattleTech Collectible Card Game is a collectible card game set in the BattleTech universe developed by Wizards of the Coast (WotC) for FASA, using the same style of gameplay and card distribution as WotC's Magic: The Gathering. It was designed by Richard Garfield. Its production ran from 1996 through 2001. The BattleTech CCG featured BattleMechs, characters, and technology from the original board game, with new artwork done by various artists. Currently, the BattleTech CCG is no longer in print.

The goal of the game is to make your opponent run out of cards from their stockpile (deck of cards). The most basic way of achieving this is to attack your enemy's stockpile with mechs and other units.

Each player will need a deck with a maximum of 60 cards. Those decks can consist of any combination of cards the player desires, although when playing with official FASA rules, choosing cards for your deck will be limited, e.g. only cards from one faction/clan. The right assortment of cards can prove vital to victory and is mostly linked to certain tactics.