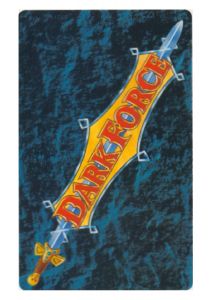 Dark Force is the first purely German-language trading card game. It was published by Schmidt Spiele in 1994 and is based on the well-known German role-playing system "Das Schwarze Auge" (DSA). Werner Fuchs was the project manager for the development.

The two players take on the role of two rival princes, who fight for rule by armies, creatures, heroes, magic, and divine intervention. For this purpose, each player puts together a certain deck of cards (so-called deck).

Production ceased in 1997 after the bankruptcy of Schmidt Spiele. There are a total of 495 different cards from 11 different categories. The cards have different degrees of rarity:

In practice, one could sometimes make clear differences in rarity within a category, especially in categories B and C. For example, some B cards were quite rare, while certain C cards were still found relatively often. In contrast, some C cards were so rare that they could easily have been assigned to category D in collective practice.