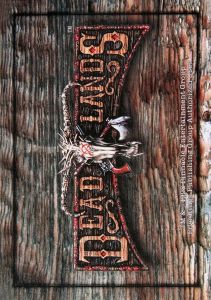 Doomtown (originally Deadlands:Doomtown) is a collectible card game, a companion to the Deadlands roleplaying setting.

The game sets itself apart from other CCGs by having each card also serve as a playing card and resolving certain in-game situations with a hand of poker, thus accentuating the Old West atmosphere of the game. The game involves complex deck construction and deep strategies, and was designed with multiplayer (three or more players) in mind. The sheer amount of card draw in the game makes luck much less of a factor, while the movement rules (in the style of board games such as chess) reward intelligent strategy.

On March 20th 2014, AEG announced a reboot of Doomtown called "Doomtown: Reloaded". It was released in August 2014 and is distributed as an "Expandable Card Game".

D
Doomtown CCG: Do Unto Others