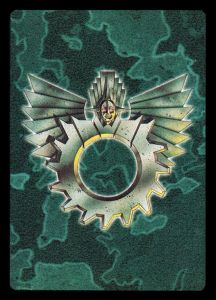 Doomtrooper, also known as Doom Trooper, is an out-of-print collectible card game designed by Bryan Winter and was released in January 1995. It was originally published by Target Games and Heartbreaker Hobbies. It is based on concepts from the Mutant Chronicles franchise. Players use warriors to attack and gain either Promotion Points or Destiny Points. Promotion points can be used to win; Destiny Points are used to purchase more warriors and equipment. There are 13 different card types and over 1100 different cards available.

The game was later migrated to a digital version that was successfully funded on Kickstarter.