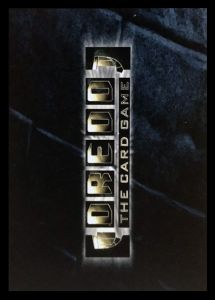 Dredd: The Card Game puts you and up to three rivals in charge of teams of Judges fighting crime in Mega City One. Each game consists of a number of turns during which crimes come into play and are investigated by the rival teams. If a team finds the Scene and Perpetrator (Perp) of the crime they can attempt an arrest. Perps are arrested by either challenging them to come quietly or, if this fails, after a battle. Upon solving a crime the arresting team gains prestige; when a team reaches twenty prestige it wins the game.

Other routes to victory include gaining five commendations, which can be collected by completing extremely hazardous investigations, and capturing the Four Dark Judges - a very difficult feat!

Teams have to be careful they obey the law themselves. Actions unbecoming of a Judge can result in Demerits for both individual Judges and the entire team. Too many demerits can result in a Judge or team being suspended. And if you lose you entire team to demerits (or gunfire) then you're out of the game.