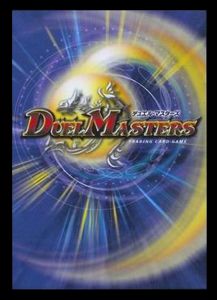 The Duel Masters Trading Card Game is a two-player or two vs. two team collectible card game (CCG) jointly developed by Wizards of the Coast and Takara Tomy (itself an affiliate of Hasbro, which owns WotC). The card game is part of the Duel Masters franchise.

The game was released in Japan in May 2002, where it quickly became the number one selling trading card game for over a year. Owing to this popularity, it was released in the United States on March 5, 2004. The game shares several similarities with Magic: The Gathering, the world's first collectible card game, which was also published by Wizards of the Coast. In fact, Duel Masters was originally intended as an alternative tradename for Magic: The Gathering and the earlier game play was abandoned in the Duel Masters manga plot to promote this latest experience.

As in Magic: The Gathering, Duel Masters players summon creatures and cast spells using mana. Key differences include the fact that all creatures and spells can act as mana producers, creatures cannot block attacking creatures without having the “blocker” ability, and that creatures only have one “power” statistic. Furthermore, duelists have shields in the form of cards that go to their hand when “broken” as opposed to Magic's “life points”. Owing to the popularity of Duel Masters, four video games (three released for the Game Boy Advance and the other for the PS2) based around the game have been produced, titled Duel Masters: Kaijudo Showdown, Duel Masters: Sempai Legends, Duel Masters: Shadow of the Code for the GBA and Duel Masters: Cobalt for the PS2.

Fans of Duel Masters around the world support player-organized tournaments and also unofficial national championships. The community centers itself on two main forums internationally which contain translations for Japanese cards. Because Duel Masters is one of the most successful TCG in all Asia, a new booster set is released every two months, and new theme decks every three months.

Kaijudo: Rise of the Duel Masters

As of December 2006, the English sets of Duel Masters were discontinued by Wizards of the Coast due to weak sales and was hosted by Takara Tomy in Japan for a brief time. However, in June 2012, Wizards of the Coast relaunched Duel Masters under a new franchise named “Kaijudo: Rise of the Duel Masters”. Based on the existing Duel Masters brand, Kaijudo features an online game, trading card game, and a television series. The product was canceled a second time in 2014.

D
DM-05: Survivors Of The Megapocalypse