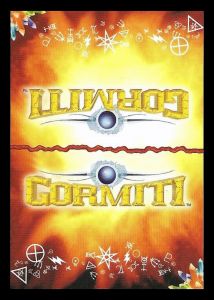 Our world is threatened by the Volcano Gormiti, frightening creatures from the parallel dimension of Gorm. Four adolescents will face the elemental monsters and ally with the Gormiti of Earth, Forest, Air and Sea. Transforming into Super Gormiti, Toby, Nick Jessica and Lucas are going to Gorm to try and save the Earth!

Inspired by the animation series of the same name, Gormiti: The Trading Card Game sees the different factions of the Island of Gorm face each other in epic battles!

Live out the battles of titans in a parallel universe!

Gormiti is a Trading Card Game for two players. The goal is to deplete all of your opponents energy orbs by attacking them with monsters that you play each turn.

Players construct their own deck of cards from their collections and use them to battle each other. Each turn you can recruit new beasts and attack your opponent with monsters you have played previously.

When battling you opponent may block your attacker with one of their monsters from their defence zone. Compare your attack stat to the defenders resistance stat and see who wins. If you attack and are unopposed then you destroy one of your opponents energy orbs. Destroy 5 or 6 (depending on who went first) and you win.