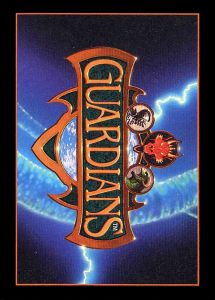 Guardians is an out-of-print collectible card game created by Keith Parkinson and Luke Peterschmidt, published by Friedlander Publishing Group (FPG) in 1995. In it, two players build armies led by powerful leaders called Guardians. Unlike many CCGs, there is a 4x3 "map" where armies maneuver; each player has strongholds on their "row", and the middle two rows are disputed. There are three potential victory conditions: a player can either defeat the enemy Guardian, conquer all 6 "disputed territories" in the middle two rows, or exhaust their opponent by depleting their armies ("shields").