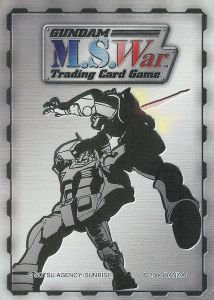 Gundam M.S.War Trading Card Game is based on the popular Japanese anime series based on giant robots. Gundam first started in 1979 and continues to this day with various series, movies, models, and toys and now a collectible card game. The particular gundam series it is based on is Gundam Wing, although they were going to release other expansions to add more series to the game.To play the game, you need two opposed decks. In this case you need the Wing Gundam starter Set and the Oz Corps Starter Decks. You play cards depicting giant robots and can equip them with character cards to increase the attack strength. The cards are played by playing their cost points. The cost if discarding a certain number of cards. Then the robots battle and the loser loses a certain number of cards from his draw pile, when the draw pile is empty, the game is over.