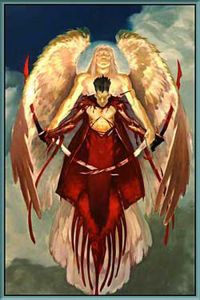 Heresy: Kingdom Come is an out-of-print collectible card game developed and published by Last Unicorn Games (LUG) in September 1995. The game was based on religion-themed fantasy in a cyberpunk setting.

The base set, released in 1995, consisted of 374 cards. An expansion called Project Demiurge with 90 cards was planned for a June 1996 release, but as a result of poor sales, no expansion sets were ever published. The company delayed the release dependent upon "sufficient orders from distributors."

The theme of Heresy was the continuation of the War in Heaven between angels and demons in a futuristic cyberpunk setting. The premise is that the barriers (known in the game as the Mirror, Shroud, or Veil) between the physical realm (the Wilds), the digital realm (the Matrix), and the spiritual realm (Heaven) have grown thin, and fallen angels on Earth are trying to use the Matrix (cyberspace) to open a portal to ascend back into Heaven. Meanwhile, Earth is torn by conflict between not just the aforementioned angels and demons, but also human governments, corporations, criminal organizations, artificial intelligences, hackers, and cybernetically-enhanced humans.