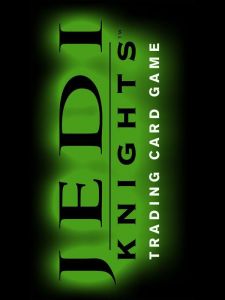 Jedi Knights is centred on the classic trilogy (A New Hope, The Empire Strikes Back, and Return of the Jedi). Unlike its predecessor, the Star Wars CCG, expansions for Jedi Knights are connected with specific aspects of all three films rather than particular settings from each film taken separately. From the very release of the game its collectible nature was underlined by the existence of silver and gold foil cards, whose rarity was clearly specified by the publisher, and cards with "1st time in print" icon.

Jedi Knights cards do not contain images taken from the original movies, as it was for the Star Wars CCG. Instead, art is computer generated. One particular quality of the visuals in the game is that card arts often portray events and characters from the films from a perspective or angle that were absent in the film or depict situations mentioned but not shown in any of the three films. Additional value has been added to the cards by adding stereoscopic effect to certain designated cards. Another addition to classic card design were 'flip movie' cards, which contained arts taken from a continuity of images that, when viewed in a specific sequence, form an animated series . There were two of those 'movie' sequences: the opening scene from A New Hope - Tantive IV being chased by Imperial cruiser Devastator and starfighter flight in the Death Star trench.