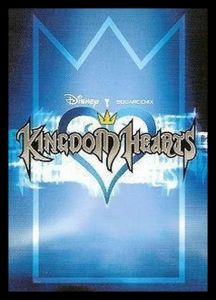 The Kingdom Hearts TCG is a collectable card game released in both Japan and North America. Japan launched the card game around November 2004 to coincide with the Chain of Memories release date. The American release was on November 15, 2007. It was initially published by Tomy in Japan but Fantasy Flight Games did the American translation.

This unique style of TCG includes various types of Kingdom Hearts cards such as characters, worlds, friends, heartless, items, magic, abilities, and even some equipment. Each starter deck comes with an instruction booklet, player’s DVD guide, a game mat, and 60 cards for your deck. The game is very easy to pickup but requires a lot of strategy to practice and win.