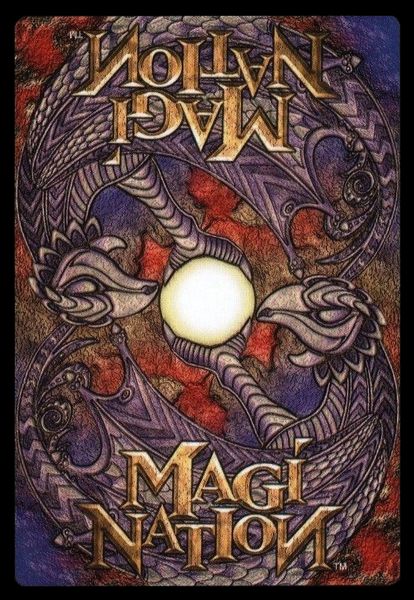 Magi-Nation Duel, sometimes abbreviated "MND" or simply Magi-Nation, is an out-of-print collectible card game (CCG) published by Interactive Imagination Corp (2i) in October 2000. It was previewed at Gen Con 2000 and was released in October 2000. Lead Designer and Co-Founder of 2i Phillip Tavel created a game with mechanics which resembled and were partially based on Magic: The Gathering, while much of the flavor of the game was based on the anime-style artwork of Matt Holmberg. Greg Richardson Von Oy (the other original Co-Founder of 2i) and Josh Lytle (a former professional gamer) helped to playtest and finalize the original design of the game. Several manga-style American artists led by Art Director: Thomas Cook include Matt Holmberg, Rich Werner (Main character designer for Kybar's Teeth, Weave, Paradwyn, Bograth, Nar and The Sands of Dresh), Tim Gillette, Chana Goodman, and Ryan Shreve helped to expand the universe of art based on the original creations of Matt Holmberg.

The game was originally designed as a bridge between Pokémon and Magic: The Gathering. The idea was that younger players whose first game was Pokémon would eventually seek out a new game to play and that Magic: The Gathering might be too complex for some players, leaving a void in the market between the two massively popular card games. The game is now out of print. A new version of the game, licensed by Cookie Jar tm, was to be released in 2008, but no relaunch ever surfaced.

The game had an active following which later released a number of cards 2i had in development, as well as a number of fan cards. These cards were previously found at CCGWorkshop, however as of January 2008, they no longer available as 2i had requested their removal.