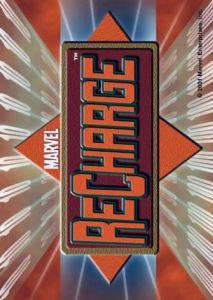 Marvel ReCharge is a CCG based on Marvel Comics, published by Marvel Entertainment Group in 2001-2002. Its a 2-player game that is modeled after Wizards of the Coast's X-Men Trading Card Game. It was subsumed by UpperDeck's Vs. System.

Two players face off with their deck of Marvel Superheroes. For every battle, you compare the power numbers on their respective Hero cards with the highest number winning. Other cards, such as Power cards and Teamwork cards, can be used to bump up the power total or bring other Hero cards into play respectively.

Counters are used to bet on the outcome of a turn, with the first player to 30 points worth of counters being the winner.