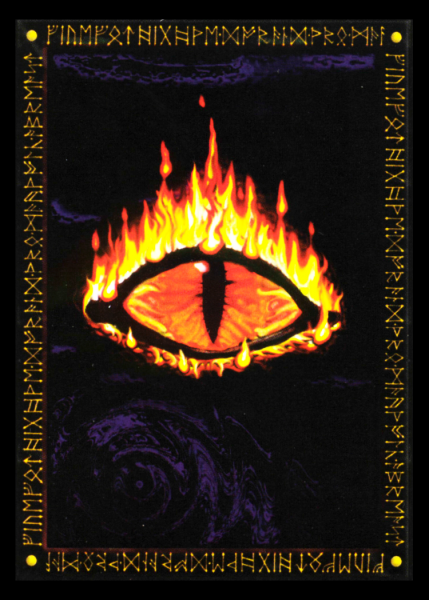 Middle-earth Collectible Card Game (MECCG) is an out-of-print collectible card game released by Iron Crown Enterprises in late 1995. It is the first CCG based on J.R.R. Tolkien's fictional universe of Middle-earth, with added content from ICE's Middle-earth Role Playing Game.

In its basic form, it is a game for one to five players, each choosing one of the five wizards to represent themselves. A turn in the game consists of one player's wandering around Middle-earth with the help of famous characters of Middle-earth, trying to gather influence and power to aid in the battle against The Dark Lord, while another player tries to harass, and ultimately kill his characters with specific hazard cards. Then, for each player's turn, the roles change clockwise around the table (the player who was moving his characters then throws hazards at the player to his or her right). Any player may also win by acquiring and destroying the One Ring after a complicated set of events.

Later expansions have added the possibility to take the role of a Ringwraith of Sauron (MELE), a corrupted wizard playing by his own rules (MEWH), the malevolent Balrog (MEBA), or even Sauron himself. The game is somewhat distinguished from most other CCG's with the use of two six-sided dice for a random factor and also by the actual map of Middle-earth, including regions your companies travel through, and site cards they visit.

Since going out of print, the game enjoys a significant active fan base. They organised the Council of Elrond who continue to support the game and oversee tournaments. The council continues to pubilsh online expansions called "Dream Card Sets".

The player base have also programmed a browser based version of MECCG, which can found at www.cardnum.net.