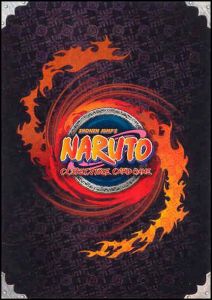 A CCG based on the extremely popular anime show Naruto.

This is a multi-player, duel-based game, in which players take alternating turns putting cards into play and attacking using Ninja cards combined with Jutsu, Mission, or Client cards. The goal of the game is to either earn ten battle rewards before the other player or force the other player to run out of cards. In cases where both players meet the conditions to win, the win is deferred to the current attacking player. Players each use a deck consisting of exactly fifty cards. Of those fifty cards, no more than three cards of the same name can be used in a single deck.

The game was cancelled by Bandai USA in May of 2013, announcing that after 7 years set 28 "Ultimate Ninja Storm 3" would be its final released set.