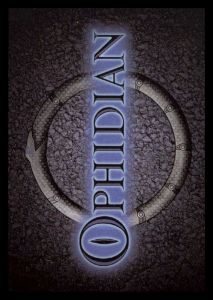 Ophidian is a highly strategic card game about Gladiator Combat in the 24th Century. The Gladiators hail from different worlds with different technological backgrounds, so the game covers all different genres including; Sci-fi, Fantasy, Steam Punk, Mythological, and Modern-Era!

Released in 2003, Ophidian: 2350 is a collectible card game (CCG) created by Ophidian Games and Fleer. It uses a play structure called the Flow rather than the normal turn-based system typically used in the genre.

In 2013, the unsold inventory of Ophidian 2350 game cards was rediscovered. It was purchased to form the basis of Hack and Slash Games. In 2015 Hack and Slash Games acquired licensing rights from Ophidian Games with a plan to bring the game back to market with a convention tour and Kickstarter event.