Quest for the Grail CCG 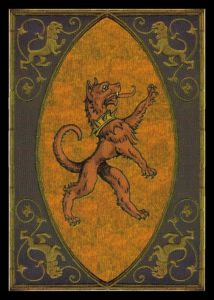 Quest for the Grail is an out-of-print collectible card game (CCG) by Horizon Games and Stone Ring in 1995.

The game was released in with two editions:

An expansion named Knights of the Isle, based on Scottish and Irish elements, was scheduled for release in April 1996 but never materialized.

This CCG is based on Arthurian legend, with elements of Monty Python (although it preceded the Monty Python and the Holy Grail CCG released in June 1996.)

Each player divides their cards into two decks:

To complete a quest, each player deploys Knights and Kings to search for equipment and spells that will aid in the quest. Successful completion of a Quest earns Valor points. Any knight or King who earn 12 or more Valor may attempt to find the Grail by completing three Quests in the same turn, winning the game.

Quest for the Grail CCG