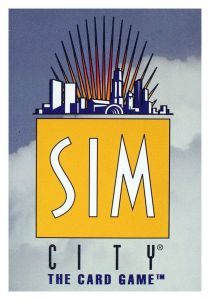 Sim City: The Card Game is an out-of-print collectible card game (CCG) based on the video game SimCity by Maxis. The goal of the game is to build a city from the ground up. Players take turns playing cards representing city blocks and collect profit.

It was released in 1995 by Mayfair Games. Several city expansions followed, adding location and politician cards from various cities, including Chicago, Washington, New York City, and Atlanta. Several expansions were planned but never released including Hollywood, Paris, Toronto and Denver. Eleven different promo packs were also released with 10 fixed cards each. Some of these promo packs included the promos that appeared as magazine inserts. Another source noted over 150 promo cards, some released to conventions and gaming stores. One promo was only available from Combo magazine and featured a picture of the Combo offices.

Darwin Bromley, the president and founder of Mayfair Games at the time, appeared as a "Mayor" card in the game. Bromley was also the conceptual designer behind the game.