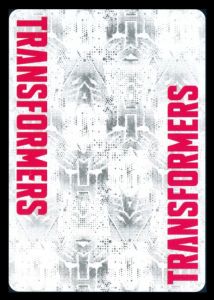 The Transformers Trading Card Game was a collectible card game in which players build teams of both Autobots and Decepticons (and later Mercenaries) to battle other players. The game was revealed on July 10th, 2018 by Wizards of the Coast, with attendees of Gen-Con and SDCC able to purchase an exclusive set-card pack.

The game used simple mechanics in which players take turns doing a multitude of things, from drawing cards, flipping their character cards their alt-modes, playing action and upgrade cards, and battling.

Between Summer 2018 and Summer 2020, five full sets of cards were released, as well as several promotional cards and five ready-to-play box sets. On July 20, 2020 it was announced through various social media channels that Wave 5: Titan Masters Attack would be the final release of the Transformers Trading Card Game. The official statement included: "While the retailer and player community continued to grow, our product offerings didn’t meet the expectations of the broader fan base to engage further with the brand", as well as problems posed by the global COVID-19 pandemic as reasons for the cancellation of the game.

Wave 2: Rise of the Combiners

Wave 3: War for Cybertron - Siege I