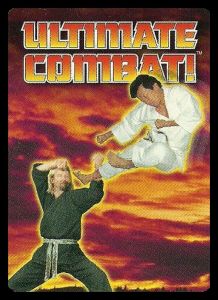 Ultimate Combat! is an out-of-print collectible card game designed around the concept of Asian martial arts combat. The game was designed by judo sensei Dave Long and released in 1995 by Ultimate Games. It is very similar to Magic: The Gathering and roughly 75% of the rules are the same. It was endorsed by the US Judo Association Team, the US Taekwondo Team and the USA Wrestling Team.

The base set covers the martial arts of judo, karate, jujitsu, tae kwon do, boxing and wrestling. The first and only expansion to the base set was The Ancient Fighting Arts of China. This covers the Chinese martial arts of kung fu and t'ai chi. It was researched with the assistance of Dr Chi-Hsiu Wing of Beijing University and Professor Yoshihiro Uchida of San Jose State University.