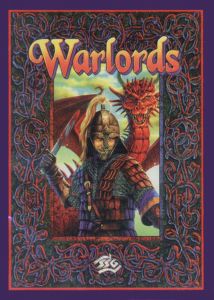 Based on the Warlords III computer game, Warlords is a simple multi-player fantasy game. The objective is to become the first player to become the supreme Warlord. This is achieved by exploring, finding treasure, or waging war by assembling followers, gathering armies, and building citadels. The game was criticized for using a "Combat Resolution Table" where a player would add the Battle Value of their Army, Hero, Ally, and Artefact (sic) in a given stack, add terrain bonuses, subtracts the defender's total Battle Value, and then compare it to the table to determine the number of cards lost in each stack. The cards had no rarities and lacked tournament support at the time.