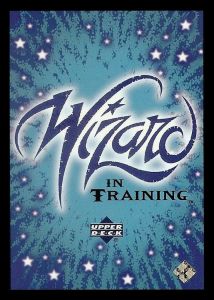 Wizard in Training is an out of print trading card game from Upper Deck. It was released in the year 2000 during the hype of the Harry Potter books.

Upper Deck developed the gameplay while in talks to purchase the license for the Harry Potter Trading Card Game. When the license was purchased by Wizards of the Coast, Upper Deck repackaged their game as Wizard in Training.

In Wizard in Training, two players take on the roles of students at Dragontooth Academy. For their final exam, students must face each other in battle and collect Dragonteeth for the right to become a wizard.